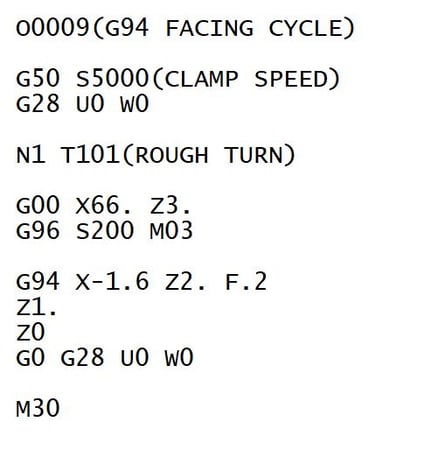 If you're like most people, the first time you see G-code, it looks like gibberish. All those letters and numbers sprinkled throughout seemingly random strings of characters.

But don't be discouraged! G-code is not nearly as complicated as it looks. In fact, once you understand the basics of how it works, you'll be able to write your own programs to control your CNC machine.

There are two ways to specify feedrate: in units per minute, or in units per revolution. G94 tells the machine to use the former method.

When you use G94, you first need to set the feedrate with a G-code like G96 or G97. Then you can use G94 to tell the machine to move at that speed.

Keep in mind that the feedrate only applies to the linear axis movements. So, if you're using G94, the machine will move at 100 mm/min on the X, Y, and Z axes. However, the feedrate for the rotational axes (A and B) will remain the same.

One final note: when you're using G94, make sure to use the S word (for speed) after the G-code. Otherwise, the machine will interpret the number as something else entirely.

So there you have it: a quick overview of how to use G94. As always, if you have any questions, feel free to reach out to us at [email protected] We're always happy to help!